Our final port of call was Freeport, Bahamas. This was supposed to be a fun stop for us, but our excursion was cancelled. We had booked the Brewery Tour, but were told during the cruise that it was a holiday the day we were going to be there, so the brewery was closed. We were very disappointed. I had booked that pretty far in advance and it was the only excursion we really wanted to do the whole cruise.

We docked fairly early and took our time getting ready. We had a nice breakfast and then ventured off the ship. The port was very industrial, but there was an area with local shopping and a few places to eat. 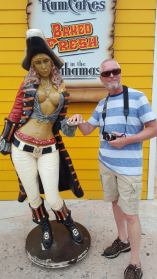 We wandered around the various shops. We tried to support the local economy and bought a few souvenirs to take back home. There were quite a few taxis that we could have taken to see the island, but we weren’t really sure where to go or what to do. We saw Senior Frogs and decided to have a drink. We noticed they had Bahamian Brewery beer (the Brewery we were supposed to visit) so we decided to get a bucket.

The beer was fantastic. I was so disappointed that we didn’t get to visit the brewery, but it was nice we were at least able to try some of their beer. We really tried to make the best of things, so we hung out at Senor Frogs for quite awhile and ended up having a great time. We sang songs, did shots, entered a drinking contest and enjoyed the day!

Cheers to our last port and an amazing vacation! Day 7 was our last “Fun Day at Sea” before we returned to Baltimore. Stay tuned for the wrap up and final thoughts.

View all posts by Amanda

We are the Wandering Haydens. All vacations are paid for by us. All opinions, ideas and photographs are our own. Feel free to share, but please do not take any images without permission. Thank you and enjoy your visit!